From Rags-to-Robots: A Brief History of Robot Patents 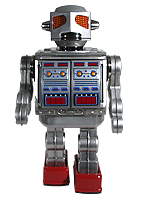 In 1961, Unimate, the world’s first industrial robot, took its place on the assembly line at General Motors, painlessly working with the furnaces and molten metals of hot die-casting machines.  Patented by George Devol in the mid 1950s, the Unimate paved the way for programmable robots, inspiring others to become a part of what would eventually become a billion dollar industry.

Just a few years later in 1966, the AI Center at the Stanford Research Center began work on the first mobile robot controlled by artificial intelligence, a system capable of moving independently around the room and successfully completing tasks requiring basic problem-solving.  Nicknamed Shakey, this famous robot was deemed the “first electronic person” by Life Magazine in 1970 and helped set the stage for humanoid robots like Honda’s ASIMO which would make its debut in the early 2000’s.

Since then, advancements in technology have made it possible for robots to become closer than ever to their human inventors.  In fact, some companies have made it their mission to give robots a more human touch.

In 2015, Google filed a patent covering “Methods and systems for robot personality development,”  in which the company describes a process by which any number of customizable personalities could be downloaded from the cloud and installed into a “robotic apparatus.” Ideally, each robot, programmed with a particular personality and designed with a certain look, would be capable of altering its behavior based on the observed actions and expressions of others, while even practicing different facial expressions and body movements to reflect mood.

Also recently, Disney has filed a patent for a robot with a “soft-body,” and other human-like features, to roam the California and Florida parks and interact with guests.  Similar to the character Baymax in Disney’s animated movie Big Hero 6, these robots would have “soft skin” and bodies made up of “fluid-filled voids,” “flexible membranes” and “pressure sensors” to make interactions with guests safe and enjoyable.