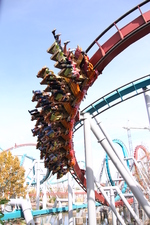 Gamers and amusement park enthusiasts alike are excited for the latest string of patents filed by Universal City Studios, a subsidiary of Universal Orlando Resort.  The collection, filed separately over a period of months, covers a number of new rides that sound as if they were pulled straight out of an old Nintendo game.

One of the patents covers a new racing attraction meant to simulate drifting, where two passengers control the speed and direction of the vehicle similar to the popular Nintendo game, Mario Kart.  Another covers a new arm that attaches to a ride vehicle in order to help camouflage track changes underneath the ride surface. This could aid in creating suspense throughout a track ride and could even assist in a vehicle making jumps and sharp turns like those seen in the Donkey Kong Country game series.

The company is also working on a flying simulator where guests would “wear” the ride vehicle, an Iron Man-like suit that would cover a person’s head, body and arms.  During the simulation, guests would experience what it would be like to fly through different environments such as asteroid fields, as demonstrated in the patent.

And while Universal is getting creative with innovative new ride concepts, Walt Disney Co. is looking for ways to better keep tabs on park visitors.  More specifically, Disney recently filed a patent for a new tracking system for its theme parks, a “system and method using foot recognition to create a customized guest experience.”  Essentially, photos taken of a person’s shoes as they enter the theme park would be matched with their basic demographic information.  Later, photos of that person’s shoes taken throughout the park could be matched in order to track that person’s specific route, most frequented locations, etc.

The company may even be working on technology that uses eye-recognition software to help determine where guests are looking, perhaps to be used in future animatronic attractions or other virtual experiences.