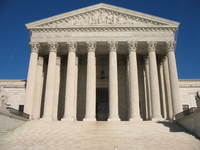 On Monday, the Supreme Court announced its ruling in the case Cuozzo Speed Technologies, LLC v. Lee, Under Secretary of Commerce for Intellectual Property and Director of the United States Patent and Trademark Office.

The case centered on specific aspects of the process of inter partes review, created by the America Invents Act (AIA) and conducted by the USPTO’s Patent Trial and Appeal Board (PTAB) as a method for challenging the validity of  U.S. patents outside of the courtroom.  After having its patent invalidated before the PTAB back in 2012, Cuozzo appealed to the federal circuit, claiming that “the Patent Office improperly instituted inter partes review…improperly used the interpretive standard set forth in the Patent Office’s regulation…[and] lacked the legal authority to issue its regulation.”

Inter partes review has been a controversial process since its inception, dividing businesses and even industries for years.  While some see the PTAB and its rulings as a threat to the patent system, others have hailed it as an effective form of quality assurance.  Here’s a brief look at what the Supreme Court decided:

In a unanimous 8-0 ruling, the Court upheld the PTAB’s process for review, backing its practice of  using the broadest reasonable interpretation standard (BRI) in post-grant proceedings. The Court also upheld that it is the responsibility of the USPTO to determine when inter partes review is appropriate claiming that, “the regulation represents a reasonable exercise of the rulemaking authority that Congress delegated to the Patent Office” and is not contingent on judicial review.