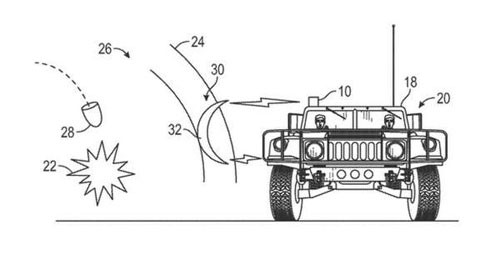 Boeing is bringing science fiction to life with its most recent patent for a “Method and system for shockwave attenuation via electromagnetic arc.” It’s essentially a force-field, originally designed to protect armored military vehicles in active combat areas.

Here’s how it would work: upon detecting the shockwave from a nearby explosion, the system would use an electrical, microwave or laser arc to “superheat” the atmosphere immediately surrounding the vehicle. What results would be a “heated, plasma-like medium between the target and the explosion that would act as a buffer and shield from any shockwave.”

The effects would be temporary, just long enough to absorb and deflect enough of a shockwave to protect the targeted vehicle and anyone nearby. That’s not the only thing Boeing’s working on either. The aircraft and defense company also recently received a patent covering “Three dimensional printing of parts,” a system and method for using 3D printers to create non-metallic aircraft parts.

Boeing’s no stranger to the art of 3D printing. The company currently has roughly 300 different part types, and approximately 20,000 parts, being used on its aircrafts, all of which have been produced using 3D printers. Patents like these are what continue to keep Boeing in the lead when it comes to innovation and aerospace technology.

The company currently holds over 7,400 patents world-wide, and according to intellectual property management vice president Rob Gullette, Boeing’s focus is on quality. In a press release earlier this year, Gullette commented that, “The results of our initiatives…indicate that, contrary to popular belief, large companies like Boeing do provide a rich environment in which innovation can thrive.”

For more information, check out www.boeing.com.