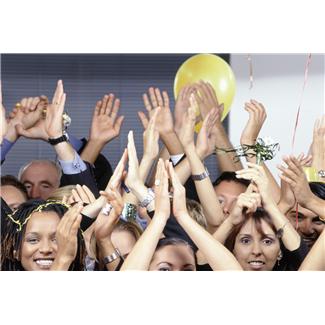 As we come to the end of another great year, we thought it would be fun to look back on some of the top patent stories of 2014.  Following are a few of this year’s hottest topics:
Alice Corp v CLS Bank – This case changed the game for software patents in the U.S. when the Supreme Court unanimously ruled Alice’s “abstract” patents invalid. Since then, federal courts have been putting their foot down when it comes to software patents, with more than a dozen rulings resulting in invalidation.
The Apple/Samsung Ceasefire – The long-winded battle between these two tech giants came (mostly) to an end this year when the companies agreed to drop all patent litigation with one another outside of the U.S.  Since the first shot was fired back in 2011, the two companies have been dueling in the courts of more than eight different countries.
Adam Carolla and the Save Our Podcasts Legal Defense Fund– After the comedian was sued by non-practicing entity Personal audio LLC for patent infringement early this year, he started a fund raising campaign to knock patent trolls out.  Taking the battle public and encouraging fans to “Become a troll fighter today” Carolla has raised nearly $500,000 and doesn’t seem intent on stopping anytime soon.
Tesla’s Open Source Patent Policy – This June, Tesla CEO Elon Musk announced new strategy for the company, stating that Tesla “will not initiate patent lawsuits against anyone who, in good faith, wants to use our technology.” With about 200 patents open to the public, Musk is powering through into 2015, certain that we can all benefit from “a common, rapidly-evolving technology platform.”
The Patent Transparency and Improvements Act’s Indefinite Postponement – Aimed at reducing the thousands of patent lawsuits brought by non-practicing entities each year, this controversial patent bill was removed from the Senate Judiciary Committee’s agenda after both sides failed to reach an agreement on how to continue with the proposed reform.  The bill may have made it through the House of Representatives quickly, but despite corporate supporters like Google and Cisco, still lost its momentum at the Senate where it still sits shelved.
Have a favorite patent moment from 2014?  Share it with us here.