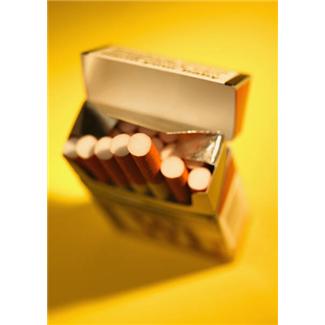 U.S. patent 8,791,329, Reducing Levels of Nicotinic Alkaloids in Plants, covers methods of “down-regulating” the protein nicotine synthase encoded on the NBB gene of tobacco plants, resulting in the production of reduced-risk tobacco products.

While tobacco continues to be used in a number of different forms, manufactured cigarettes are the most common.  Nicotine from a single cigarette totals approximately 10 mg and can reach the brain in less than 10 seconds after inhalation, increasing the levels of neurotransmitters and chemicals in the brain.  Often, this leaves consumers with feelings of relaxation and euphoria.

However, Nicotine does have a dark side.  Not only can too much (about 50 to 60 mg) result in nicotine poisoning, but the addictive nature of nicotine often leads to an increased consumption of tobacco products like cigarettes, which are responsible for an estimated 440,000 deaths per year.

22nd Century is one company that is hoping to change those numbers.  Since its inception, the company has remained committed to its mission of developing and commercializing reduced-risk tobacco and smoking cessation products.  It is expected that this technology could help the company create very low nicotine (VLN) cigarettes containing approximately 1% of the nicotine of conventional cigarettes.

VP of research and development at 22nd Century, Dr. Michael Moynihan, said in a recent statement that, “The NBB gene technology is one of the keystones of 22nd Century’s intellectual property and represents our second-generation gene technology that has significant advantages over our earlier technology.”

22nd Century currently owns or exclusively licenses 116 patents in over 75 countries.  For more information on the company, click here.