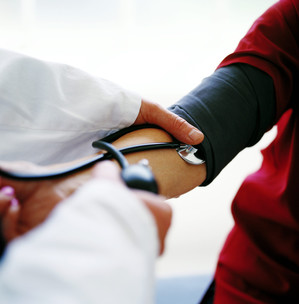 Researchers over at the University of Texas in Austin have developed a new technology that could revolutionize healthcare.

It’s a patch just 0.3 mm thick, applied to the skin and lined with sensors that can detect body movement and vital signs.  The soft, flexible device, also referred to as e-skin or an e-tattoo, also contains RAM for storage, microheaters, and medicine.

Applied to the skin using electrostatic force, the patch could one day be used to store a patient’s medical information, monitor that patient’s health status and deliver medication over an extended period of time.   The hope is that it may one day help track the movement of and deliver medication to patients with diseases like Parkinson’s and Epilepsy; however, mechanical engineer and study coauther Nanshu Lu revealed that it is nowhere near being ready for market use.

At this point in its development, the patch still needs to be directly wired to a power supply and data transmitter, and finding a power-source that’s flexible enough to incorporate into the e-skin is proving difficult.

Wearable tech has been slowly transforming the healthcare industry, from devices like the Nike Fuel Band to the skin-like technology mentioned above.  Even companies like Google are getting involved with new apps and tools like Glass, that can help doctors monitor a patient’s condition from afar.  In fact, IHS predicts that wearable tech will be a $30 billion industry by the year 2018, with unit shipments estimated to reach 210 million.

With the continued progression of smartphones and tablets and a growing interest in tracking our own sleep patterns, heart rate and other general health data, the integration of wearable tech into the healthcare industry is inevitable.  What do you think of these recent developments?