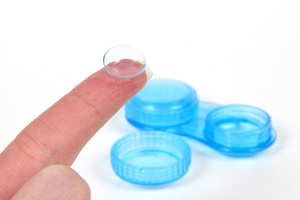 Researchers over at Google are working on a new technology aimed at helping people with diabetes manage their blood glucose levels more effectively.  The Smart Contact Lens project was first announced earlier this year, and with the recent acquisition of two patents, the company has continued to push forward in creating this breakthrough device featuring “a tiny wireless chip and miniaturized glucose sensor that are embedded between two layers of soft contact lens material.”

Nearly 26 million people in the U.S. currently suffer from diabetes – roughly 10% of the U.S. population – and those diagnosed are at high-risk for a number of life-threatening complications, including kidney failure and heart disease.  Google’s latest research could give people with diabetes an easier way to manage their disease and prevent blood sugar from reaching dangerous levels.

Sensors embedded in the lenses would read chemicals in the wearer’s tear fluid, sending an alert whenever blood sugar levels are out of whack.  As noted in the patents for the technology, “Human tear fluid contains a variety of inorganic electrolytes (e.g., Ca.sup.2+, Mg.sup.2+, Cl.sup.-), organic solutes (e.g., glucose, lactate, etc.), proteins, and lipids. A contact lens with one or more sensors that can measure one or more of these components provides a convenient, non-invasive platform to diagnose or monitor health related problems.”

With prototypes now in testing, the company hopes that its “smart contacts” could one day replace the painful finger-prick method of testing blood sugar levels as well as continuous glucose monitors that are implanted under the skin.

Google also hopes to help the blind “see” with another contact lens equipped with cameras and sensors capable of detecting light, color, objects and motion.  Controlled via a user’s unique blinking patterns, these lenses could process, analyze and send image data to a remote device, like a user’s smartphone which could then audibly relay important information to the user via voice technology.  This could make crossing busy intersections or navigating crowded areas much easier for the visually impaired.

For now, however, these camera-equipped contacts are still in the imaginative stage, but that’s not to say that the idea isn’t being taken seriously.  The company is currently in discussions with the FDA regarding the lenses for diabetics, and though there is still a lot of work to be done, gears are turning to try and get these “smart contacts” out on the market.