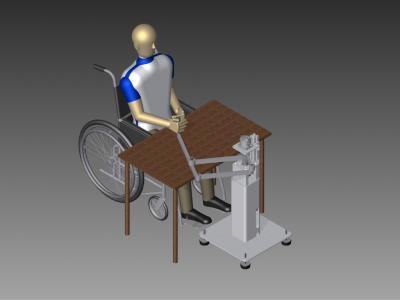 Meet the Robotherapist 3D, a robot designed by company Instead Technology to aid in the recovery of stroke patients.

A stroke can often result in the suffering of patients from spasticity or muscle tightness. Robotherapist 3D is designed to help these patients perform a series of light exercises and movements on a consistent basis, allowing them to begin the rehabilitation process early on and regain control of their everyday movements.

Instead Technologies sprouted from the University Miguel Hernandez, comprised of a Biomedical Neuro-engineering Group and is now bringing to market their own line of rehabilitation robots. Based out of Spain, the target market for the small start-up company resides in public and private hospitals and rehab clinics all over Europe and some Latin American countries.

Founding member of the company, Nicolas Garcia-Aracil explains that, “In general, these robots can be used to help rehabilitate people who have suffered brain damage or those who are in the early stages of a neurodegenerative disease.”

The group hopes to soon expand their focus from stroke victims to those suffering from Parkinson’s, Alzheimer’s and multiple sclerosis. The company also continues to innovate and develop other new technologies for the health market, including the BreastExplorer- a system that aids in ultrasound exploration and visualization of breast morphology.

So what’s in store for this different and impactful team of experts? For now, it’s a worldwide patent for the Robotherapist 3D, and a vow to continue to “meet the high demands of patients with severe disabilities…based on new solutions to assist the recovery from a nervous system injury, keeping always the patient at the center of the team.”