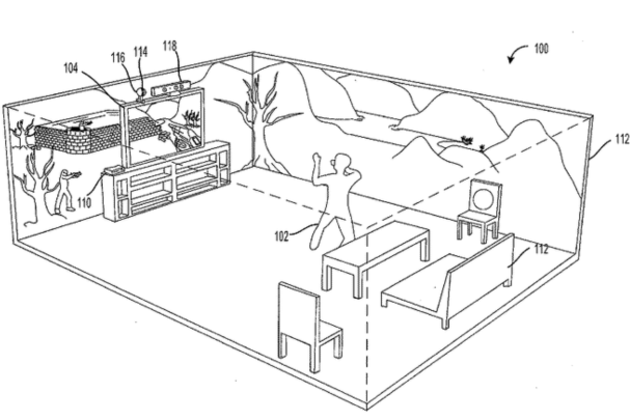 Well Gamers, Microsoft is at it again with a recently released patent application for an “immersive display experience” for gaming. The patent covers an “environmental display,” capable of expanding a user’s game graphics beyond the standard TV screen.

It’s an addition to the standard method of gaming that would extend a user’s view and overall experience. For example, a player would have the ability to “turn around and observe an enemy sneaking up from behind.” With gaming systems now, “Even when focused on the display, the user may perceive architectural and decorative features of the room the display is in… such features are typically out of context with respect to the displayed image, muting the entertainment potential.”

Tied to a depth-sensing camera system like the Kinect, a projector attached to the standard gaming system would create a 360-degree virtual scene around the user. Capable of scanning and surveying the layout and topography of a room, using color and distortion correction, and tracking and adjusting images based on a user’s movements this environmental projector would create clear and accurate panoramic images regardless of the room it’s in. It would also have the ability to “adjust apparent perspective of the peripheral image display as a user turns and moves around the room.”

While the images projected on a user’s wall “may be displayed at a lower resolution than the primary image,” 3D glasses may or may not be incorporated as a way to add to this virtual reality. Already, Microsoft plans for an upcoming Kinect using augmented reality glasses have been leaked, along with the concept for a new gaming system dubbed the ‘Xbox 720.’

It’s a Star Trek-style Holodeck for your home that may or may not appear on the market with future Xbox systems. Other companies like Sony and Oculus have also been working on creating “next-generation” virtual reality devices and headsets. In fact, Sony’s “Personal 3D Viewer” head-mounted display is rumored to be hitting the Japanese market sometime next month.