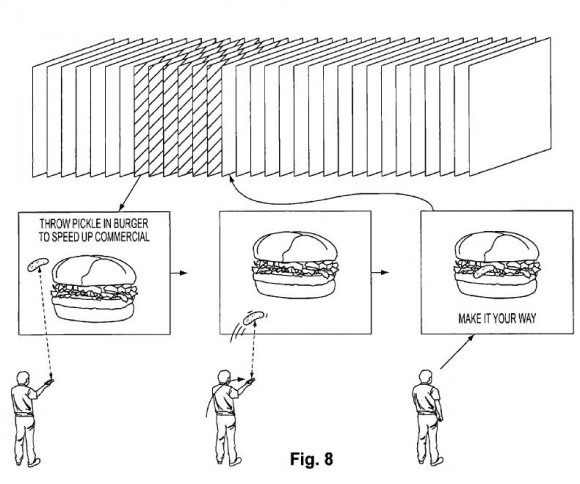 Tech fans are buzzing about Sony’s recently revealed patent for “converting television commercials into interactive networked video games.” New advertising tactics have continued to be explored by top tech companies, a good number of them using current gaming systems as an integral part of the design.Sony, however, has taken the idea of TV-internet-based advertising to a whole new level.

The patent introduces this unique concept: “A media player coupled to the broadcast or streaming media source identifies the existence of the interactive segment and presents the user with an enhanced and interactive mini-game.” Say there is an advertisement presented for McDonald’s. If the person watching wanted to skip the ad entirely, he’d have to shout “McDonald’s!” Should he just want to speed up the commercial and get through it, he may be instructed to throw a pickle into an on-screen burger.

Viewers would also have the option to purchase items directly from the screen. The filing gives the example of Joe Smith who, after seeing an ad for pizza on his TV, decides to order for delivery using a “buy” button on his screen.

While the patent seems to be based on the line of PlayStation game systems out there, the document does mention that “multiple methods of delivery” are used, and specifically references the Dual Shock 3, PlayStation Move, YouTube, Netflix, Facebook and more. The service isdesigned to work with any internet-connected TV.

Sony claims that these mini-games would only last as long as standard commercials, though we can never be sure. One hope is that gaming consoles of all sorts will be able to “link” up in order to allow viewers to play these branded mini-games against other viewers. Specifically, the patent states that a user is presented with “an enhanced and interactive mini-game commercial that can be played with other ‘viewers’ in a common or disperse demographic.”

So what are fans saying about the latest advertising concept? While some are outraged at the invasive nature of such technology, many simply seemed pleased by the fact that it may never come to fruition. Filed back in 2009, the patent was only recently uncovered, so don’t expect an official announcement any time soon.