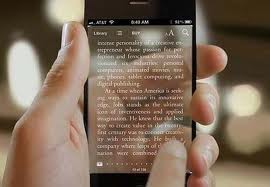 What’s Apple up to these days, you might be wondering? Well, while the leading tech company may be wrapped up in a number of courtroom battles, they’re still pushing the envelope when it comes to the latest and greatest technology trends.

Recently, the company received a patent for a new “Touch Screen Liquid Crystal Display,” a technology that would allow Apple to start producing thinner and lighter touch-screens for devices. With the current touch sensors created to lay on top of a screen, this new design would involve joining the touch sensors with the display circuits. We may soon be saying goodbye to our thick and bulky iPhones and trading up for a new thinner-than-we-thought-possible device.

Also, up its sleeve: a new, advanced graphic app for the iPad, iMac and Mac Pro rivaling Adobe’s Photoshop. Apple’s newest application will eliminate the hassle of selecting tools through a menu and simply allow users to manipulate their work through recognized “intuitive gestures” like pinching, pulling, and rotating the items with their fingers. In addition to the mouse trackpad options, Apple hopes to save users time and simplify the graphics process in allowing them to use their hands.

On the topic of touchscreens, the company has also filed a patent application for an “Illuminated Touchpad,” which focuses on improved backlighting and interactive illumination. The technology would work to modify the appearance of a user’s touchscreen depending on the way in which it is being used. Changes in color or light intensity would occur as a user’s fingers move across the surface. It may not be the most necessary of changes when it comes to the latest Apple devices, but it is something to look for in the future.

As Apple continues to file numerous applications for patents that possess even the smallest technological changes to their devices, the battle with Samsung rages on. Lucy Koh, the judge presiding over the case, seems hopeful that the two companies will come to a settlement. Should a jury have to make the call, however, she’ll be ready. Already having asked the two tech giants to limit their number of claims in the suit, she wants rival CEOs to meet for one last shot at reaching an agreement. Jurors are set to begin deliberation by August 21st.