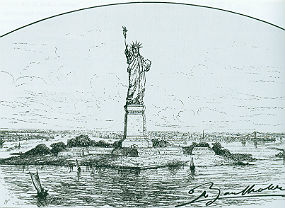 This month were taking a look back at Lady Liberty herself, since February 18th marks the date that Frederic-Auguste Bartholdi was granted the design patent for the statue in 1879. A universal symbol of freedom, democracy, and friendship (a gift from the people of France), the Statue of Liberty is visited by thousands of people daily and has become one of the most famous monuments in world history.

Bartholdi learned of his passion for large sculptural pieces on a trip to Europe and the Middle East. Already a student of art, sculpture, and architecture Bartholdi jumped at the chance to design a lighthouse for the Suez Canal in Egypt in 1869. His vision was a colossal robed woman holding a torch and he named it Egypt Brings Light to Asia. It was at the canals inauguration, however, that he was told he could no longer continue the project.

His efforts were not lost, though, as a second chance came in 1870, after Edouard de Laboulaye proposed a monument for the United States representing freedom and democracy. Bartholdi was recruited and the design and construction of the Statue of Liberty Enlightening the World began.

Several trips to the U.S. later, Bartholdi decided that New York was the gateway to America and new that the statue had to be erected at Bedloes Island. The first piece of Lady Liberty to reach full construction was her arm and torch which was put on display at the Centennial Exposition in Philadelphia in 1876.

In 1884, the statue reached full construction in Paris and was presented to the United States Ambassador to France. Afterwards, it is disassembled and shipped to New York. With the completion of the pedestal in 1886, the statue is then reconstructed. One million New Yorkers were present for the official unveiling of the Statue of Liberty in October of 1886. During the ceremony, Bartholdi receives the key to the city and climbs the Statue in order to release the French Flag. Celebration follows.

If youve never been to see Lady Liberty in person, you should. The 305 foot monument is one that youll never forget.