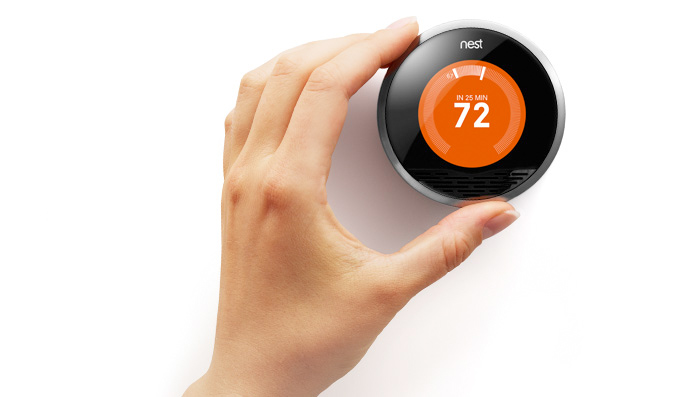 Former Apple executive Tony Fadell, has taken a slight turn from his previous iPod division days and hoisted the original thermostat to a new level. Created in 1953 by Henry Dreyfuss, the famous T-86 Round (and others like it) is boring, clunky, and out-dated. Even the more modern, box thermostats arent worth getting excited about. Enter, the Nest.

Fadell’s new, circular, creative thermostat comes equipped with a color-changing LCD screen thatadjusts its look with the temperature. Spin the dial to set the temperature, but if you really cant bring yourself to get there, it can also be controlled with a smart-phone app via wi-fi.

Not only is this remote control device visually appealing, but its pretty smart too. Fadell designed the Nest to look for patterns in any adjustments that are made to it, eventually leading the thermostat to program itself. The smart device analyses the amount of energy used, adjusting by a degree or two from whats been programmed in order to conserve. Just a one degree difference can reduce energy use by nearly 5%.

It also has activity sensors built-in to detect when the house is empty and controls the heating / cooling level correspondingly.

These utility-bill savers were originally priced at $249, but have sold out through the rest of 2011. Now, Ebay users are bidding up to $900 in order to get their hands on one of these sleek, new thermostats. As theNew Year approaches,Fadells greatest hope is to keep people happily engaged, while also pushing them to use less energy.