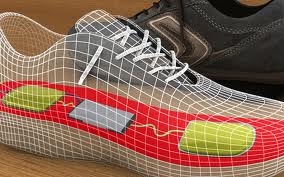 The liquid moves over electrodes, converting electrical energy to mechanical energy, and can create enough electricity to charge a smartphone. In fact, a small battery would store the energy, and can be accessed by a micro-USB port on the heel of the shoe.

Generally when we walk, we waste nearly 20 watts per second, turning most of the calories into heat that quickly dissipates. A small prototype showed that each step taken could move 1,000 droplets of liquid, generating up to 10 watts of power.

A new real-size prototype is currently in the works, as designers push to come up with a marketable product that people would actually want to wear. If successful, it could extend the life of phone batteries by a factor of ten.

Its not the first energy-saving shoe attempted, though. In 1998, MIT researchers designed Nikes capable of broadcasting a stride-powered radio signal. Also, inventor Trevor Baylis designed a boot-heel insert to charge his cell phone during a long trek through a South African desert.

This newest shoe design, however, is said to be much more efficient. Previous attempts used a technology called piezoelectrics, tiny crystals that create a current as theyre compressed and expanded. In reality they didnt produce nearly enough power, generating only a few thousandths of a watt. Reverse elctrowetting is the next evolution, and many think that it will prove successful in the near future.