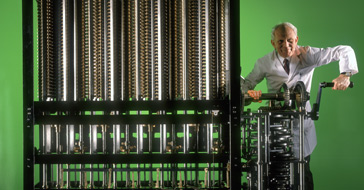 Alan Turing is often credited as the founder of computer science. A highly intelligent and innovative man, he created the Turing Machine, and later one of the first designs for a stored-program computer, theACE. Whether or not he is the true father of computers, however, is now up for debate.

Recently, a British research team posed the question, Did an eccentric mathematician named Charles Babbage conceive of the first programmable computer in the 1830s, a hundred years before the idea was put forth in its modern form by Alan Turing?

Charles Babbages design for a difference engine, a mechanical calculator capable of computing various sets of numbers, was never completed due largely to funding problems. However, the designs were passed on, and in 1991 the Science Museum in London built and completed Babbages plans for the Difference Engine only to find that it does indeed work. (The device consists of 4000 parts and weighs over three metric tons.)

Now, people are in debate over the true father of the modern computer. Some argue that Babbage, not Turing or Zuse, is it. Google father of computer science and Babbages name is scarce, though if we were to ask most people today who invented the computer the popular answer would most likely be Steve Jobs or Bill Gates.

With the completion of the museums 10 year project, computer historians have come to the general consensus that Babbage was the first to conceive of the machine that would later spawn the modern computer. His work was simply forgotten and conceptually recreated by Turing nearly a century later.