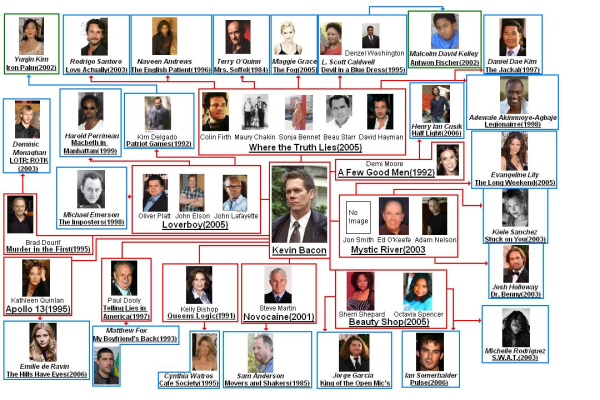 As we all may have noticed at some point there is a list of references cited adorning the face of every US patent. Utilizing these lists of references, patents can be connected to other patents through the references cited on their own face, as well as the instances where the patent is cited on a subsequent patents face. By connecting patents in this manner a network begins to form and begs the question: How many steps would it take to connect any patent with any other patent?

With a question like that naturally the mind shifts to the man, the myth, the legend Mr. Kevin Bacon, who allegedly can be connected to anyone in Hollywood through 6 steps or less. So, starting with any patent where would we find ourselves after 6 steps through the references cited network? In honor of the hard working star that paved the way for school dances in conservative small towns everywhere, we begin with a patent attributed to an inventor named Kevin A. Bacon.

Start: US 7,797,934 B2, Kevin A. Bacons patent for an anti-stall, hydraulic control system for construction equipment

First Degree: US 6,305,419 B1, a system for regulating pilot pressure to a control valve

Fourth Degree: US 5,923,826 A, a copier/print with a digital reproduction system communicating with a remote document processing station by way of a print server

Fifth Degree: US 7,164,492 B2, a facsimile device with an algorithm for automatically resizing an input document before being transmitted

Sixth Degree: US 6,208,427 B1, a Personal Digital Assistant (PDA) printer and printing method

So there you have it, in 6 steps you can connect Kevin A. Bacons hydraulic control system for construction equipment to a PDA printer. While this journey represents one connection path for the Kevin Bacon patent, feel free to follow your own path of patent connection intrigue and share it in the comments section below. Have a suggestion for an inventor or invention you would like to see in the Six Degrees post? Share that in the comments too!