Chances are, if youve ever used a computer, a smart phone, a PDA, or any electronic device for that matter, youve probably heard of Google. According to Hoovers, Google operates the leading Internet search engine, offering targeted search results from billions of Web pages. Results are based on a proprietary algorithm — Google’s technology for ranking Web pages is called PageRank. The company generates nearly all of its revenue through ad sales. Advertisers can deliver relevant ads targeted to search queries or Web content. The Google Network is a network of third-party customers that use Google’s ad programs to deliver relevant ads to their own sites. Google subsidiaries include YouTube and DoubleClick. Founders Sergey Brin and Larry Page (CEO) each have nearly 30% voting control of the firm. Google Inc (not including its subsidiaries) holds almost 6000 patents (not including patents not yet assigned). There are over 3000 patents that are from the US, DE, GB, FR, JP or are PCT or EPO filings. Shown below is a 2D Bar Chart of Patent Count vs Main IPC Class, and a 2D Bar Chart of the Patent Count vs Year. 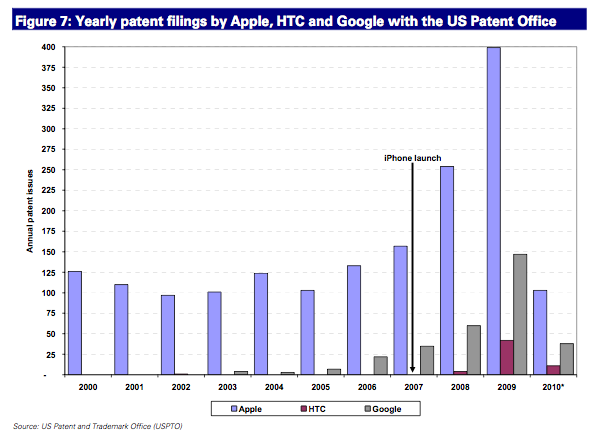 As can be seen from the Bar Chart above, although Google had patents dating back years ago, the numbers really dont start increasing until the mid-2000’s and have steadily risen since then. While they do not yet equal the prolific volume of Apple, they certainly do compare favorably to HTC. So — is Google a data/search company or a telecomm/electronicscompany? Hmmm… That’s a discussion for another day.