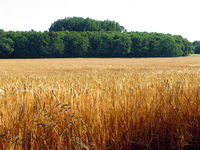 Though patents on “essentially biological processes” are prohibited under European patent law, those that have been genetically altered or engineered are currently fair game.  Government officials are expected to reopen discussion of this so called “grey area” of the patent system, however, protests in Munich continue in the meantime.  In the past, more than 200 patents covering plant mutations have been issued, some of which were created through more conventional methods like crossing and selection.  Despite Carlsberg and Heineken’s insisting that their patents don’t cover the actual strains of barley, (only the process by which they’re created) local farmers and brewers aren’t buying it.

Instead, many feel that these patents will be a detriment to local communities, especially breweries, giving Big Beer even more dominance over the market.  No Patents on Seeds, a coalition advocating the exclusion of “processes for breeding, genetic material, plants and animals and food derived thereof” from patentability, has been spearheading the movement for European patent reform, urging individuals and communities alike to get involved.  Just last month, members of the European Patent Office met to discuss how to better strengthen restrictions when it comes to patents covering the breeding of plants and animals.  An agreement was reached to exclude any applications related to plants and animals derived from crossing and selection, though the specifics of the new document remain controversial.

On the website for No Patents on Seeds, the organization writes that, “New loopholes have been created that will allow the relevant prohibitions to be eroded…According to the new rules, patent applications will be refused only if they are related to a plant or animal arising directly from crossing and selection. In most other cases plants and animals will remain patentable…The patents on barley and beer granted to Carlsberg and Heineken are just one example…The EPO has itself confirmed that, based on the new rules, it is unlikely that these patents will be revoked.”