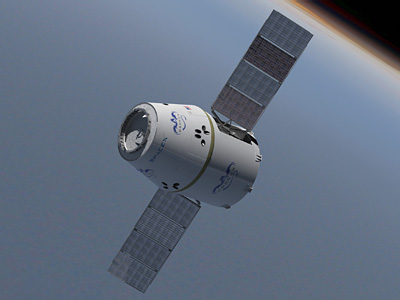 On May 22nd in Cape Canaveral, Florida, the first private capsule ever to dock at the International Space Station was launched over 200 miles into space. Set to return today after its nine day journey, the Dragon delivered more than 1,000 pounds of food, clothing and other equipment to the space station and was reloaded with trash, research results, samples and other miscellaneous items.

This free-flying, reusable spacecraft is the only vehicle capable of bringing back large amounts of cargo from the station. All other crafts capable of delivering items to the ISS are destroyed after leaving the station. The Dragon will enter the earths atmosphere similar to a comet, only to slow at 45,000 feet with a series of parachutes. A main parachute will then open at 10,000 feet allowing the craft to land safely in the Pacific Ocean where a team of divers will be waiting to collect it.

SpaceX was established in 2002 by PayPal founder Elon Musk. Since then, the company has been developing a series of launch vehicles and engine programs and is currently receiving NASA funds to work under the Commercial Orbital Transportation Services program. The development of the Dragon crew and cargo capsule and the Falcon rockets has led to several technological breakthroughs, and in 2009 Musk received the Innovator of the Year Award from Research and Development Magazine.

Through the development of the Falcon 1, Falcon 9 and Falcon Heavy vehicle series, SpaceX provides the capability to carry satellites, other spacecraft and more to any altitude, all with a best price guarantee. The Dragon crew and cargo capsule, upon successfully landing today, will prove revolutionary in terms of space travel and will provide reliable and proficient transportation for crew and cargo to the ISS and other future destinations.

Overall, the companys aim is to simplify, reduce the cost of, and successfully implement commercial launch vehicles and systems. More specifically, the goal is to reduce cost and increase reliability of space travel by a factor of ten and to rekindle humanitys interest and efforts when it comes to space exploration and development.