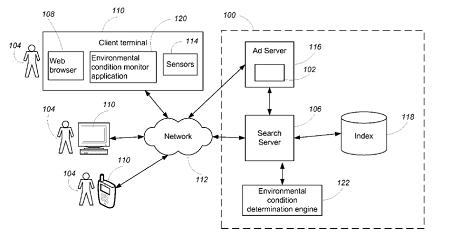 Amazons stalking patent for mobile devices seems to have just tapped the surface of a new technological trend. Designed to track your movements and make predictions about where you are going to go next, the system then sends announcements for shops, restaurants, etc. that it thinks you are about to pass.

Google was recently awarded a similar patent for advertising based on environmental conditions. Based on temperature, sound, even light surrounding a users mobile device, Google plans to send advertisements for related items. If freezing temperatures are detected, ads for winter clothing and snow equipment may be sent in the form of text message, image, or even video.

The patent details describe how advertisers would bid on certain keywords associated with different environmental conditions. REI, for example, could bid on words like freezing, cold, and outdoors to ensure that advertisements for warm jackets and sleeping bags reached users in those conditions.

More controversy arises, however, with the technologys ability to pick up background noises during a users phone conversations. Taking it a step further, the technology could also recognize key words used in conversations which would then trigger related advertisements. If youre talking to a friend about an upcoming camping trip, Google will hear about it and send you ads based on what was said.

To be fair, Google does recognize the privacy issues that the patent presents, though the company has little to say about it other than its still a long way from being developed. As of right now, the technology remains simply in its patent. It could be a long time before we see it in action.