But First…Let Me Take A Selfie 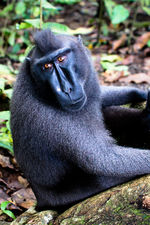 Wildlife photographer David Slater was on a trip to Sulawesi, Indonesia when a monkey stumbled across his camera, left unattended, and took a picture.  Naruto, a then six-year-old crested macaque, snapped a selfie on Slater’s camera that would later become the cover of the photographer’s book, Wildlife Personalities.

In 2015, PETA sued Slater on behalf of the macaque, stating that he had infringed the animal’s copyright by publishing the image in his book. The organization argued that since Naruto took the photograph, he is the true owner of the copyright in the photo, not Slater, who held a British copyright for the photo at the time.  PETA sought financial guardianship of the photograph on behalf of the monkey, though the claim was quickly dismissed in court on the basis that copyright law does not extend to non-human animals.

PETA appealed the decision, though Slater and the animal rights organization recently reached a settlement.  Under the agreement, Slater consented to donate 25% of any future revenue from the photo to animal welfare groups that help protect crested macaques and their habitat.  Though it was agreed that the U.S. Copyright Act does not take into consideration the rights of non-human animals, PETA hopes to one day extend these rights to animals for “their own sake.”

In a blog entry regarding the settlement, PETA writes, “Naruto and the famous ‘monkey selfie’ photographs that he undeniably took clearly demonstrate that he and his fellow macaques—like so many other animals—are highly intelligent, thinking, sophisticated beings worthy of having legal ownership of their own intellectual property and holding other rights as members of the legal community.”

To read more, or to view the actual photo, click here.