“The Trolls,” A Comedy about Patents 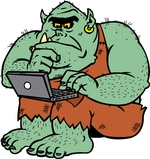 If you can’t beat them.  Troll them.  Or so says Lex Lybrand with his new movie The Trolls, a comedy about patent trolls.  Set to release this October, the film follows a small Austin startup on its rise to success and its eventual fight against the patent troll that takes it all away.

Inspired by comedian Adam Carolla’s recent battle with non-practicing entity Personal Audio LLC, director Lex Lybrand hopes to educate and incite others to stand up and fight back. “Patent trolls are an ugly, stinky zit on the face of the American legal system,” he writes.  “With congress unable (or unwilling) to present any meaningful reform, we’re turning to the power of satire to bring this issue to the masses.”

Trolls have long been the bullies of the patent system, gobbling up patents solely for the sake of squashing any small companies in their path.  The odds are rarely in favor of small startups, especially when they’re forced to focus what little time and money they have on litigation.  In fact, some experts estimate that every nine out of ten startups are destined for failure.

Lybrand and his crew hope to see that all change, however, and were able to raise more than $4,000 for their film on the crowdfunding site IndieGoGo.  The team picked up even more steam at a fundraising event held in Austin and has since wrapped filming. Now, The Trolls is making the rounds at film festivals across the country and is expected to become available on DVD, Blu-ray, iTunes and online streaming services sometime next month.

“It’s my goal for this film to be what a high school history teacher shows their class 10 years from now to show them how absurd this system used to be,” Lybrand writes on the company’s fundraising page.

Learn more about his project by clicking here.