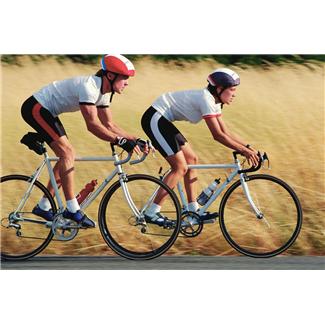 The Netherlands is getting people excited about solar again with the recent unveiling of its first solar panel bike path.  The project, deemed SolaRoad, covers a 100-meter stretch of bike path, constructed of individual concrete modules layered in tempered glass with solar panels embedded in between.

This may just be the pilot stage of the project, but it’s estimated that this small stretch alone could help to power as much as three houses for an entire year.  If it’s successful the project will continue, extending the bike path so as to produce enough electricity to help power streetlights, traffic signals and more.

These roads can be anywhere from 50% – 300% more expensive to build, and there is the possibility of more frequent repairs due to harsh weather conditions and roughly 2,000 cyclists riding over it daily.  Groups like the Netherlands Organization of Applied Scientific Research (TNO), however, are remaining optimistic and believe that as much as 20% of the Netherlands’ roadways could be converted to solar in the near future.

Project manager at TNO, Wim van der Poel, says that “With SolaRoad, we are making double use of infrastructure…SolaRoad will be starting point… towards a closed ecosystem.  From mobility through energy back to mobility – which makes the circle complete.”  Henk Kamp, Dutch minister of economic affairs, is also excited about the project, claiming that “SolaRoad is a world first that will put the Netherlands on the map as a leader in sustainable innovation.”

Many are wondering if the U.S. will soon follow in the Netherlands’ footsteps.  Experts have considered that America could cut fossil fuel emissions by as much as 75% simply by adopting solar roads, but the cost of installing and maintaining those roads may keep companies from jumping in head first.

To learn more about the SolaRoad project, check out www.solaroad.nl/en/