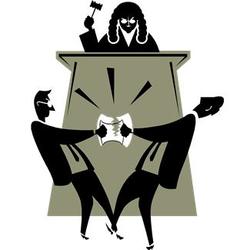 We’ve mentioned before that comedy-king Adam Carolla (star of the The Adam Carolla Show) is caught in a patent mess. The comedian’s podcast network ACE Broadcasting is just one of several companies being sued by Personal Audio LLC for infringing on a patent covering a “system for disseminating media content representing episodes in a serialized sequence.”

In an effort to fight back, Carolla has set up a FundAnything page titled “Save Our Podcasts Legal Defense Fund” aimed at raising money to help cover the $1.5 million in legal fees it will cost to defend his case. So far, he and his team have raised over $380,000 with help from individual supporters and a $20,000 donation from Amazon.

In addition to the financial progress being made, the Patent Trial and Appeal Board recently issued its first ruling on the Electronic Frontier Foundation’s challenge to Personal Audio’s podcasting patent, claiming that there is a “reasonable likelihood” that the EFF will prevail. Now, the EFF may continue to argue that the podcast technology claimed by Personal Audio is unpatentable based on prior art evidence.

Carolla is keeping fans up to speed with regular updates on his fundraising site, announcing that “Our brothers in arms – The Electronic Frontier Foundation (EFF) got their petition to the Patent Office accepted for review this week. But we’ve still got a long way to go… Remember this isn’t just about my show. If I go down all of podcasting goes with me.” Should he lose in the end, Carolla says he may have no choice but to take his show permanently off the air.

Fans and supporters of all kinds are continuing to offer both emotional and financial support to all organizations involved in the upcoming suits, following the belief that it’s patent trolls like this that are going to “destroy the fabric of America.”