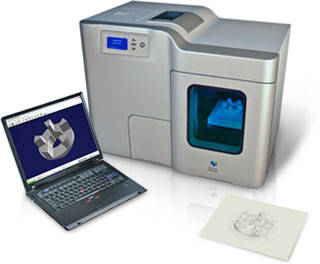 3D printers capable of outputting physical objects have been in development for over two decades. The first commercial 3D printer was based on a technique called stereolithography, a concept invented by Charles Hull in 1984.

Already, 3D printing has been refined to the point where digital models can be duplicated into physical prototypes, and prices of 3D printers have declined substantially in the past five years, to as low as $1,000 from $400,000.

As a result, industries of all kinds have embraced 3D printing that creates objects by laying down successive layers of materials. By 2020, its estimated that 3D printing will grow to become a $5.2 billion industry.

Though still only in the beginning stages, personal 3D printing technology already shows incredible potential. Broken mechanical part? Just download the relevant CAD file and print it out in plastic. However, any technology that allows users to replicate objects is bound to have some IP implications.

If people can spend $1,000 for a device that lets them make any object up to a cubic foot in size, then the possibility of infringing on copyrights, trademarks, and patents is incredibly high. Right now, however, stricter regulation seems premature.

For now, so few people have 3D printers that legal action seems unnecessary. No one is mass producing plastic products and selling them, and the websites hosting downloadable 3D files dont appear to be making money.

When 3D printers are as common as inkjet printers, though, there is sure to be a number of unauthorized design files being traded, just as music files were largely traded via applications like Napster and Limewire. Will people be willing to pay for these files when they’re freely available for download elsewhere?