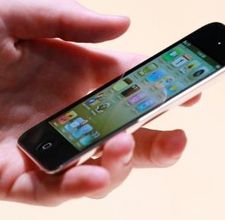 If you havent heard the latest Apple news, CEO Steve Jobs has officially handed over the reigns. Its a historic shift that may or may not have a dramatic effect on the company and its successful line of products. Jobs, however, is confident about the future, saying, I believe Apples brightest and most innovative days are ahead of it.

Proof of that may be in two of Apples most recent patent applications for new technologies designed to keep iphone, ipad, and ipod screens free of fingerprints.

Using a technique called Physical Vapor Desposition, an oil resistant liquid-coating called oleophobic is applied to the screens. The direct spray in a controlled environment is designed to keep any impurities or unnecessary dilution from being introduced.

Its a great alternative to wiping the device on a sleeve or pant leg every so often, though Apple has come up with an even newer alternative.

A new voice identification technology, described as User Profiling for Voice Input Processing, able to understand and process complex commands, is in the works. According to the application, users will have the ability to voice multiple commands, such as, “find my most played song with a 4-star rating and create a Genius playlist using it as a seed.”

Though the basic voice command features are nothing new, Apple is continually striving to better the technology, and has made some pretty significant strides even in the midst of their CEOs recent departure.